Diagnosed with Autism Spectrum Disorder at the age of six, Matthew Kenslow shows a pathway uniquely abled people like him can use to achieve their goals and live life to the fullest.

SAN FRANCISCO, December 07, 2022 — Award-winning author and Royal Rangers Commander, Matthew Kenslow, has released Juggling the Issues: Living with Asperger’s Syndrome, his well-detailed book, which looks into the pros and cons of living with autism from a first-hand perspective.

According to the standard symptoms of autism, there is no doubt Isaac Newton, Henry Cavendish and Albert Einstein were people who were on the spectrum. In fact, Newton appears to be the earliest known example of a person with any form of autism. However, this didn’t stop him and others from achieving greatness. It’s fair to say that autism can enhance greatness if channeled in the right direction.

From families/caregivers, those on the spectrum, Special Education teachers, school admins, trustees and superintendents, Juggling the Issues: Living with Asperger’s Syndrome has thus far made an encouraging difference. The book also describes the discrimination of some nondisabled people to autistic people. This life-changing book shows how the author achieved his set standards, even in the heat of discrimination. 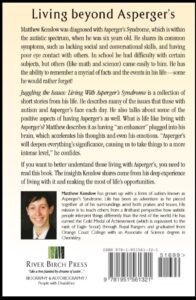 Juggling the Issues: Living with Asperger’s Syndrome is a collection of short stories from the author’s life events. With sections that talk about what it is like to live with autism, the author also explains the discriminations he received from being uniquely different from the nondisabled.

Since lacking social and conversational skills are some of the common symptoms of Autism Spectrum Disorder, Matthew Kenslow provides his framework for success by drawing upon lifelong experiences of living with the diagnosis, Asperger’s Syndrome, as well as achieving his goals even in the face of discrimination.

This road map to living your best life by accepting yourself as a person with autism, overcoming discriminations, as well as achieving your dreams, will provide pathways to plug into your enhancer — a thought and emotion tuning to rediscover their greatest potential.

Sadly, society doesn’t know that autistic people have strengths and abilities, such as:

These are just a few of the many beautiful abilities of autistic people. You will discover a slew of these abilities inside Matthew Kenslow’s book.

Juggling the Issues: Living with Asperger’s Syndrome addresses vital questions like “What is life like living with Autism?” The book educates the nondisabled on the impact of discrimination on the mind of the autistic, and encourages them to accept people living with autism.

As the world is constantly enlightened, gradually purging itself from bullying and discrimination, and a wave of acceptance of people uniquely abled, Juggling the Issues: Living with Asperger’s is an encouraging book on living the best autistic life ever.

Juggling the Issues: Living with Asperger’s Syndrome is available for purchase on Amazon https://www.amazon.com/Juggling-Issues-Living-Aspergers-Syndrome/dp/1951561325

In an interview with 9-Figure Media, Matthew Kenslow says, “I want the world to understand what it is like to go through Autism Spectrum Disorder through a firsthand perspective. I want everyone to be encouraged that they can do whatever they set their heart and mind to do, despite a disability.

“Everybody is unique. Having a disability should not stop you from being the person you were born to be. I want people with disabilities (physical and/or developmental) to be inspired and motivated that they have purpose in this life. I want the nondisabled to accept us who have a disability for who we are.”

Juggling the Issues: Living with Asperger’s Syndrome is a book written by a person with Autism Spectrum Disorder, in which he tells the world exactly what it is like to live with Autism, the pros and the cons. Matthew Kenslow has endured two decades of discrimination from people who thought “Autism” meant “Alien.”

Not letting that stop him, he became a pianist, juggler, award-winning author, Eagle-Scout equivalent, Royal Rangers commander, substitute teacher, and social media influencer of hundreds of thousands of people around the world. This book has made an inspiring difference to several people worldwide – both for the neurodivergent and the neurotypical.

Active Study at the Forefront of the Return of International Students

Would African Languages Ever Be Powerful Languages? Mandla App Believes It Is Possible